The City of Mobile, Alabama, is at the center of the maritime, aerospace, tourism and healthcare industries along the Gulf Coast. Known as the birthplace of Mardi Gras, Mobile is home to more than 190,000 residents. The Mobile Municipal Court handles misdemeanors and traffic offenses. In early 2020, ongoing restrictions around COVID-19 required the municipal court system to introduce a hybrid environment that enabled in-person and remote participants to meet for court proceedings.

The Mobile Municipal Court selected Atlantic Video Corporation to design and integrate a new audiovisual (AV) system. “Mobile’s Municipal Court had a 27-year-old system with 18 rack spaces of equipment,” explained Gary Crumbley, sales and marketing manager for Atlantic Video Corporation. “Our goal was to provide higher quality audio and video, increase connectivity and minimize rack space. In addition, the pandemic has changed the traditional courtroom. Municipal court had divided the courtroom with dedicated spaces, plexiglass partitions and other safety measures. Although the Municipal Court is currently operating regularly, previous restrictions surrounding COVID-19 required a limited number of people permitted in the courtroom.”

Atlantic Video Corporation needed to implement a hybrid solution where the audio and video could be distributed to other spaces inside and outside of the facility. “We designed an AV system that was built around Visionary and Symetrix,” noted Crumbley. “We replaced the existing speakers, microphones, cameras and connectivity solutions to create a unified, future-proof system. We added wireless connectivity that allows lawyers and prosecutors to bring evidence on a tablet, laptop, phone or any other portable device and connect via Apple AirPlay, Google Chromecast and Miracast to allow up to four devices to simultaneously connect; eliminating the need for cables, dongles or additional software.

Crumbley added, “We presented the idea of a unified system over the network. We can take content and live camera video from one courtroom and distribute it to any other courtroom. We needed to not only capture the content and live video but transport it to multiple locations. Richard Hembree, our manufacturer representative at Griffith Sales Associates, had recommended Visionary’s PacketAV Matrix Series. The PacketAV Matrix Series can be controlled through a built-in driver in the Symetrix system. Visionary’s interoperability was an important feature for us because the system provided us with pre-built modules to streamline installation.” 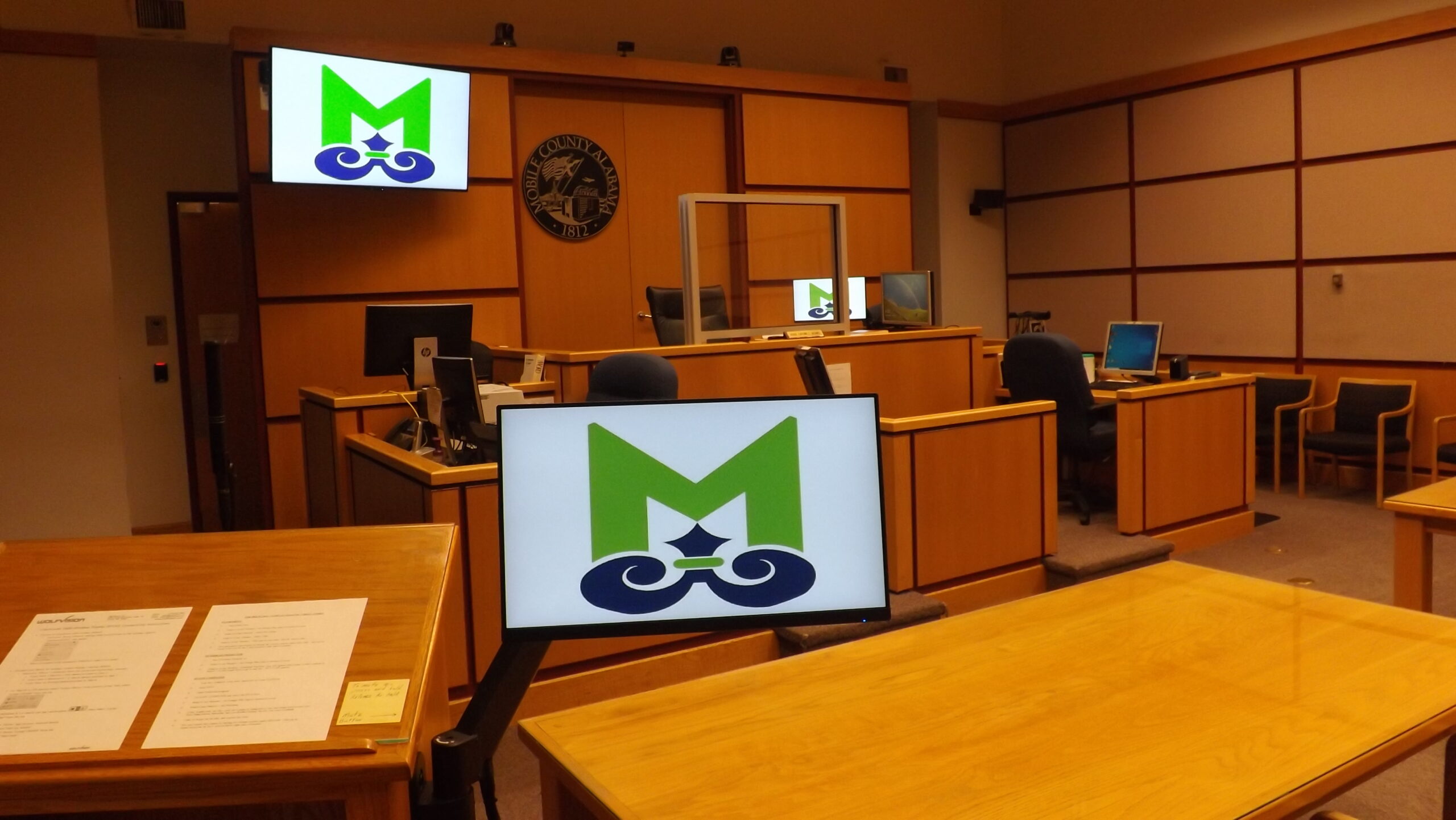 “We integrated the PacketAV Matrix Series to transport the audio and send video to the touchscreen displays to create a singular, cohesive solution,” said Crumbley. “We’ve deployed the PacketAV Matrix Series at each of the desks and podiums throughout the courtroom. It’s enabling the transportation of video to the main displays in the courtroom. It also enables the capability of transporting outside the courtroom in the gallery and overflow spaces. We’ve added connectivity to the precincts, allowing police officers to give their testimonies remotely from an interview room at their facility or from the computer in their patrol cars, rather than traveling to the courtroom. We’ve also started to implement connectivity in the jail to allow the inmates to join the court proceeding without having to relocate to the courtroom. The courtroom features 24-inch touchscreen displays. It enables participants, such as lawyers, prosecutors, witnesses and judges, to annotate on evidence.”

Mobile’s Municipal Court required a user-friendly system. Atlantic Video Corporation needed to automate the audio and video across the network. “Typically, the clerk is managing the content,” explained Crumbley. “We wanted to eliminate multiple buttons and components for the clerk to set up each time the system was in use. We added the City of Mobile’s seal into each decoder’s splash screen. If the judge and lawyers want to conduct a private, side-bar conversation, the judge can push a sidebar button that will mute the microphones, generate white noise from the speakers, and display the City of Mobile’s seal. Once the conversation concludes, the system will resume to normal operations. The judge can privately review submitted evidence before electing to publish on the large displays in the courtroom. Once it has been determined that participants in the proceedings can view the materials, it’s then distributed out to the other displays with the touch of a button on the judges’ touch panel display.”

Visionary’s products are recognized throughout the world for providing outstanding performance and reliability cost-effectively. “Visionary’s product quality and reliability is paramount,” said Hembree. “As a manufacturer’s representative, it’s important that I provide my customers with solutions that simply work. Visionary’s PacketAV Matrix Series provides the highest level of quality and the price point is very reasonable. In addition, Visionary’s technical support has been phenomenal. We worked closely with Chuck Larson [director of training and support for Visionary] and he provided us with reliable support throughout the entire project.”

Atlantic Video Corporation has developed a proof-of-concept deployment, which has proven to be a success for the City of Mobile. The decision has been made to expand throughout the entire Government Plaza by integrating Visionary in the remaining 17 courtroom spaces. “Atlantic Video Corporation’s partnership with Richard Hembree at Griffith Sales Associates and Visionary’s reliable, personalized support made this project a success. We’ve created a prototype for future hybrid courtrooms and we look forward to growing our relationship with Visionary and Griffith Sales Associates as we implement this solution into additional courtrooms.”